Palo Alto High School opened its doors in 1894 as a private school with three teachers, twenty-four students, and tuition of $6 per month. Classes were held in two upper rooms of the Channing Avenue Grammar School. Three years later trustee (and parent) Anna Zschokke mortgaged her home and donated funds to build a three-room high school at 524 Forest Avenue near Cowper Street. Thus began the legacy of the extraordinary parent support for Paly that continues today.

In 1900 a $200,000 bond issue was authorized and a new high school was built at Channing and Webster Streets where Channing House now stands. The school's colors were red and green (until 1949 when they changed to green and white). By 1907 Paly had grown to a school of 200 students and 9 faculty members.

In 1908 the first girls’ athletic team (basketball) was formed. In the same year, the school board banned dances in response to adverse publicity about student morals. Not to be deprived of an outlet for their teenage energy--typical of Paly students--they found an alternative; twenty students formed a band in 1911 and marched for the first time in the May Fete Parade.

The Paly Band has participated in the parade ever since. 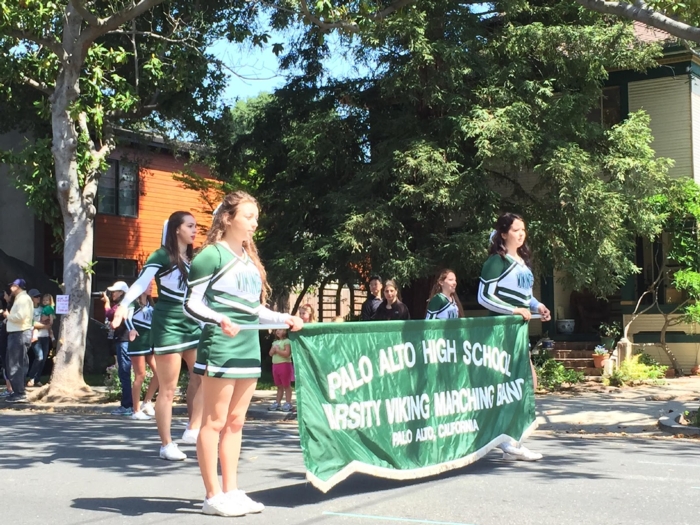 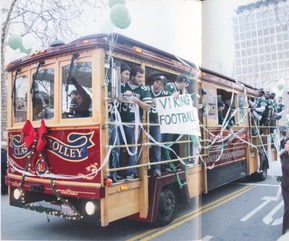 In 1913 the Palo Alto PTA was formed with Mrs. Mary Green as President. Local news of the day tells us that our girls were active in The Suffrage Movement. In 1917 Palo Alto voters authorized a $200,000 bond to build a new high school. After a delay because of the influenza epidemic, the current Paly campus opened officially on December 24, 1918.  Students, faculty, and local dignitaries marched from its Channing Avenue location to the new Palo Alto High School on Embarcadero at El Camino, with the 91st Company of High School Cadets triumphantly leading the way. The community was impressed with the school's auditorium - unique at a time when even Stanford had none - and the high-ceilinged library doubled as a ballroom.

When the present Palo Alto High School was built in 1918, some townsfolk were critical of a location so far out of town. But the 30-acre site with its Live Oak trees was being sold by neighboring Stanford University at the token cost of $1.00 per acre, and optimists thought that Palo Alto might well grow to the south.

(The original photograph of this momentous occasion is hanging in the Tower Hallway --see below.)

The student newspaper, THE CAMPANILE, appeared for the first time the same year. During the 1920s, Paly’s population doubled. In 1921, Howard (Hod) Ray, the legendary Paly Football Coach joined the staff. The Student Betterment Committee was organized to improve the school grounds, and other student clubs flourished. A group of students formed the “Overalls Club” in protest of the high price of clothes. (Nine faculty members and nearly 150 boys wore overalls every day for a time.) This diverse assortment of student interest is evident in Paly’s more than 60 clubs today.

The community continued to grow. Subdivisions sprang up south of Embarcadero Road bringing thousands of new families to Palo Alto schools. The Elwood P. Cubberly and Henry M. Gunn High Schools were built. Paly is undergoing major remodeling leaving only the Tower Building and the Theater of the original campus.

Traditions continue to be established, notably Paly’s much-loved Spirit Week which started in 1981. In 1997, on the 100th anniversary of the founding of Paly, Alumni and Friends of Palo Alto High School was formed, providing support for Paly through scholarships, fundraising, reunions, and more.

There are more than 100 years worth of photos and memorabilia on display in the Tower Building Hallway.

THE HISTORY OF THE TOWER BUILDING 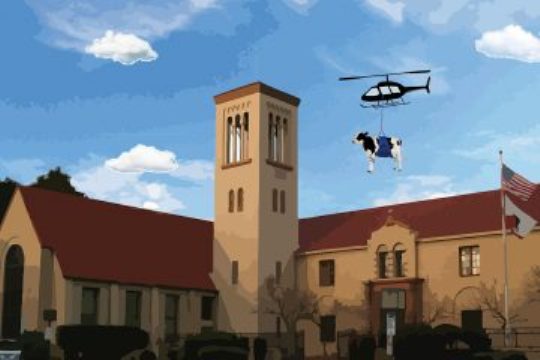 The bell tower of Palo Alto High School will be 100 years old in 2018. Plagued by rumors involving cows and helicopter rescues, few people know the truth of how the building  came to be.

Palo Alto High School was originally constructed in 1918, though most of the school was demolished and heavily modernized in 1972. The two-story tower building, however, was left untouched, making it nearly 100 years old and a historical landmark.

The Paly bell tower is known as a campanile, or a freestanding bell tower. Campanile is an Italian term derived from the word campana, meaning bell. The Campanile, Paly’s newspaper, was named after this term in 1918.

Since its construction, the bell tower has overseen a plethora of events. Perhaps the most infamous event that took place in the bell tower was the senior prank that occurred in the late ‘90s.

Despite being a well-known legend among Paly students and staff, many people doubt this prank’s credibility.

“I heard that this one grade brought a cow up to the second floor of the bell tower, I don’t know if it actually happened though.”

Math department Instructional Supervisor and Paly historian Arne Lim has conducted school tours for Paly alumni from as far back as the class of ‘45, and has never heard an alumni group discuss the alleged prank.

Lim said he can’t confirm the prank and thinks that the story is simply a “legend passed down from generations.”

“The story details are a little unclear, but from what I know, a bunch of seniors brought a cow up to the second floor of the bell tower as a prank,” said junior Henry Saul. “I’ve heard different accounts on when this happened, or how they got the cow out and whether the pranksters were punished, but everyone I know agrees that seniors brought a cow up the stairs of the tower building.”

According to an article from The Campanile, Volume LXXV, No. 2, Oct. 2, 1998, seniors placed “a cow on the top floor of the tower building.”

The seniors were able to get the cow to the second floor of the bell tower by coaxing it up the stairs. Once there, however, the cow was stuck.

“It took them forever to get that cow down from there.”

According to Science Focus, a science magazine, it is extremely difficult for cows to walk down stairs especially a steep lengthy flight, such as the stairs located in the bell tower.

Stuck at the second floor of the bell tower with no way to get the unfortunate cow down, stories differ greatly on how Paly administration ultimately removed the cow.

“I think [the prank] is really funny because cows can’t go down stairs, so I heard that they had to get a helicopter,” Saul said.

Some students and staff, including Saul and junior Kaitlyn Ho, have heard Paly administrators were forced to send a helicopter to rescue and return the cow to safety.

“One of my teachers told me they had to get a helicopter to get it down,” Ho said.

But many are skeptical of this rumor, saying using a helicopter seems improbable.

“I think it makes more sense that they used a crane to get the cow down,” said junior Warren Wagner. “Getting a helicopter would be super expensive.”

According to Occupy for Animals, a non-profit organization committed to ending animal cruelty, cranes are not generally used to transport live cows due to animal cruelty concerns.

However, it’s unlikely that a helicopter was used in the Paly prank due to the high cost of acquiring a helicopter.

“[Renting a helicopter] is typically $1000 per hour with a minimum charge of two hours.”

In addition to the alleged prank, a student “sit-in” took place in the building in 2009.

Paly administration suspended all students involved with the infamous 2009 egg wars after vandalism and destruction of property occurred on Gunn’s campus, according to The Mercury News.

Egg wars, an unsanctioned spirit week tradition where seniors and juniors meet up at night to throw eggs at each other, is looked down upon by school administrators.

“It is not a harmless tradition,” said Assistant Principal Jerry Berkson in a Paly Voice article from October 2009.

Many students thought this punishment was unwarranted and severe, consequently organizing a student sit-in at the tower building the following Thursday morning in protest.

Nearly a hundred students participated, according to an article from The Paly Voice in October 2009, though most left for class by 8:15 a.m.

Throughout its history, the tower building has been the site of extensive change and controversy. Though the current bell tower is the same as the one constructed in 1918, it has been remodeled various times.

In 1968, the building was seismically retrofitted to increase safety in the event of an earthquake.

The campanile section of the tower building was strengthened again in 1989 following the Loma Prieta earthquake.

Administration plans to further renovate the area, hoping to include over 200 mailboxes in the reception area, as well as new bathrooms and an elevator, according to an article from The Campanile in January 2014.

The partitions currently dividing the guidance hall will also be removed, and the guidance offices will become an open hall.The tower building renovations, however, are not a top priority according to Lim.

“With all the construction projects going on campus, this will be one of the last ones because there are no students here,” Lim said to an alumni group. “We try to do the student stuff first.”

Though there have been changes to the bell and tower building throughout the years, and administration plans to improve the building, it is highly unlikely that the building will be destroyed according to Lim.

“There has been enough of a contingency to say ‘lets not get rid of this building,’ and it will not go away” said Lim in a Campanile article from January 2014.

This confirms that the tower building — along with it’s quintessential glory and history —will not be leaving anytime soon.