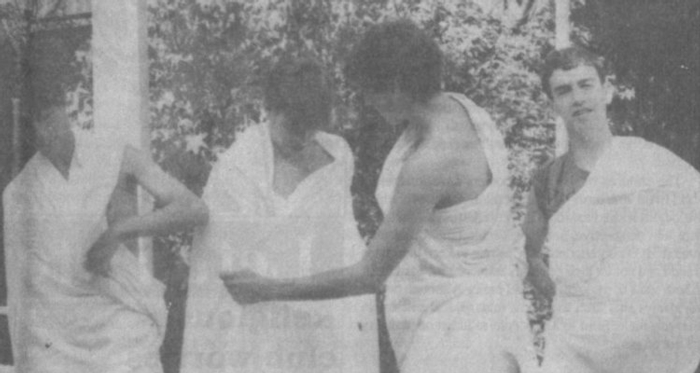 One hundred years, over 500 editors, thousands of staff writers, approximately 4,000 issues, millions of copies and one Woj. The Campanile has witnessed innumerable events in the past century. Let’s take a look back through our newspaper’s archives and see what was happening at Paly in the month of October over the last 100 years.

Ninety-four years ago, construction for the swimming pool, the automotive-mechanic building, the science wing and the gymnasium were all underway. The gym was originally designed to have a boys’ unit and a girls’ unit, which more recently were referred to as the big and little gyms, respectively. The three-part construction project was intended to accommodate a rapidly  increasing student body. After almost 100 years, Paly’s athletic center has gotten a much-needed upgrade.

In addition to The Campanile switching from digits to Roman numerals when numbering its volume, a Republican banquet was held with Alonzo L. Baker, the Republican nominee for the eighth Congressional District. The banquet was held in support of 1936 presidential candidate Alfred M. Landon. The dinner cost $0.50 a ticket (about $8.75 today) and members of the Republican Club were invited along with their parents. Rallies were held so that students could meet Landon. Though Landon did not win the presidency, he was still the governor of Kansas and a prominent political figure at the time, and was even featured on the cover of Time magazine in 1936.

This week in 1941, Paly held a pep rally in order to drum up enthusiasm for the basketball and football teams, which were both playing games in the same week. According to the article, the entire student body assembled to cheer on the Vikings. The rally consisted of performances from the pep band and cheer squad as well as several speeches from the student body president and the basketball and football coach. The rally proved to be successful as both teams won their games. This scene from history solidifies Paly’s reputation as a spirited school.

Twenty-five years ago this week, Spirit Week was just starting off with several changes implemented in order to eliminate controversy. There was formerly a yell, which was a competition between which class could yell the loudest.

This activity was eventually replaced due to the argument from many students that it was unfair (also, because the school was getting noise complaints from Stanford).

This year in history, Spirit Week was only four days long due to teachers’ anger about the intrusion it had on classes. Luckily, this did not become a tradition and students presently enjoy five full days of spirit-filled fun.

In an in-depth and daring Spotlight article written in 2003, students took a look at the racial segregation that took place at Paly. The article delves deep into the divisions between White, Asian, African American and Latin American students at Paly.  Students concluded that the racial division went all the way back to elementary school.

Students were separated by race from an early age because of segregated neighborhoods.

The article was a powerful and accurate view of racial segregation and bias at Paly. It was a strong piece and a proud asset of The Campanile’s history.